Taking lessons from mouse lung development, we were the first to have pioneered a method to generate functional airway epithelial cells from human embryonic stem cells (ES) and induced pluripotent stem (iPS) cells and showed that stem cell-derived lung tissue could be used for cystic fibrosis disease modeling. Since then, we have refined and developed 2D air liquid interface and 3D organoid models of human lung using stem cells which allows us to study lung developmental processes, disease and identify personalized therapies.

During embryonic development, the lung arises from a small group of cells that express the transcription factor Nkx2-1 and form a bud in the foregut endoderm. The lung bud would undergo successive stereotypical branching (branching morphogenesis) and form a complex network of airway conduits and terminally ending in alveolar sacs, where gas exchange with the lung vascular network and the production of surfactants needed for breathing occurs. Lung development begins roughly four weeks post conception and continue up to three years after birth. By the end of development at least 40 different cell types would form this intricate major organ involved in gas exchange, immunity and xeno-metabolism. 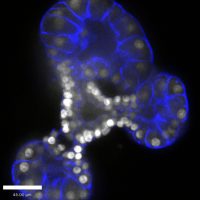 Cystic fibrosis (CF) is a monogenetic disease that affects many major organs and tissues of the body with the most lethal effect in the airways. The CF gene first discovered here at The Hospital for Sick Children (SickKids) in 1989 and since then several gene modifiers have also been identified that affect disease severity leading to variance in clinical outcomes. Our lab has great interest in developing stem cell-based tools to understand individualized disease and predict personalized pharmacological therapies for CF. We are developing high-throughput and high-content screening methods of 2D air liquid interface and 3D organoid models of human lung to test for pharmacological compounds from iPS cells from various CF mutations.

To do this we are employing a combination of high resolution microscopy, high content/high throughput robotics, stem cell engineering and functional assays.

If you are self-motivated, well-organized, highly independent but also work well with others and unafraid of joining a young lab eager to trail blaze the field, please send your CV and three letters of recommendations or reference contact information to Dr. Wong.

These are exciting projects we wish to do and will do if the right person comes along. You must have extensive research experience! If you fit this profile, please contact Dr. Wong.

Copyright 2021 The Hospital for Sick Children (SickKids). All rights reserved.
Accessibility | Privacy | Terms of Use | About the Research Institute